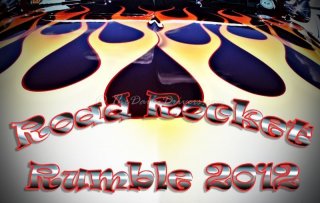 Road Rocket Rumble 2012 We decided to try to beat the heat by going on Friday to the Road Rocket Rumble. There were not as many cars as expected to be there on Saturday, but we still saw plenty of awesome cars. Almost everyone we talked to was pleasant and more than willing to talk about their ride. We also spoke a couple of pinstripers at the event. One of the guys was super nice, the other one had his moments. I tried talking to him about striping, but he had an attitude towards me, however later on he was nicer.

We had our almost 3 month old son with us on our journey around the Rumble, and a couple of friend’s of ours also had their little girl with them. People were super nice about giving us shade and letting the mom’s and babies take a rest under their tents. One group was especially nice from Greenwood Indiana. I can’t remember the name of the group or club, but they let our wives take our little ones under the canopies and hang out. Check out the pictures below and try out the Road Rocket Rumble next year!

Tags:
Previous Article
Ford continues Aston Martin “look” with Focus and other models
Next Article
Save the Nürburgring