The Café Racer Trend is Growing… 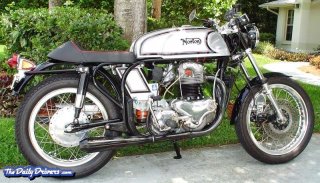 Café bikes or café racers are starting to become more and more of a mainstream trend throughout the United States. They have been somewhat mainstream in the western states like California for quite a while, but now the trend, or way of life, is spreading across the globe. Some old bikes have already been converted to a café racer and newer bikes are being modified to look like the old European café motorcycles from the 60’s.

The café racer started as a British type of motorcycle and rider in the 1960’s, but were also common in Italy, Germany, and other European countries. Essentially it was any motorcycle with a certain “look” and was used for short and fast trips from one café to another. The first group said to have started café racers were the Rockers. The Rockers have been credited as the first group in most of the literature I have read on the café culture. They were a young group of people who loved Rock and Roll and from what I can tell the café racer culture is part of today’s rockabilly culture. One of the main feats of café racer was “doin the ton” or going 100 mph at least once on your bike. Back in the day it was quite an accomplishment.

I find these bikes especially awesome because of the look. My grandpa had an old Norton motorcycle which my uncle has now, but I can remember how amazing it was when I would look at it in the garage. It wasn’t really a café racer, but it was from the starting era of the café racer.

The café racer looked somewhat like a race bike of the 60’s era. They generally have very low and narrow handlebars so the rider could be more aerodynamic for higher speeds. The tanks are usually elongated and the seat was usually rearward mounted or a hump seat.

Today’s café racers aren’t all European bikes like the old days, they are now just about any type of bike you can find. A lot of people are making them out of old Japanese bikes because they are easily found and usually cheap. Below you will find some pictures of bikes I have found across the Internet. They are either the traditional European café racer, the Japanese versions, or even some new factory café racers. Either way, they are a great way for someone to build a bike how they want and have something they can be proud of for as little or as much money as they want to spend. I am thinking about building a mini-bike version myself, and if it happens then I will be sure to document the build here on TheDailyDrivers.com.

If you are looking for a show about café racers, check out http://www.caferacertv.com/ or the show can be seen on the Velocity HD channel. 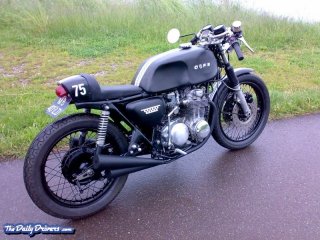 Above: I found this 1975 Honda CB500 on the forum http://classicbikes.actieforum.com/. It is a great looking bike and shows what you can do with an older Japanese bike. 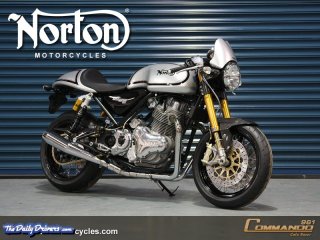 Below: I found this advertisment picture on NortonMotorcycles.com. It is the 1962 Norton Manx 30/40, a very slick looking bike then and now. 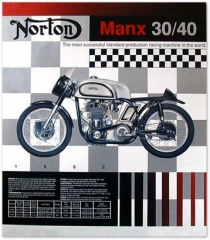