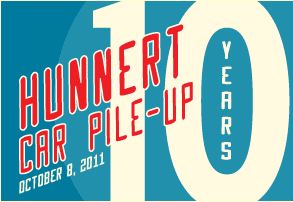 The Hunnert Car Pile-up is an amazing show put on by the car club the Chrome Czars and the show has some very specific rules to what cars can be entered. Your car must be a 1964 or earlier Hot Rod or Custom built in a “Traditional Style.” This means all cars in the show should look like they could have been built in the 1940s, 1950s, or 1960s with little or no visible modern equipment.

The rules are as follows: (from www.hunnertcarpileup.com)

1. All vehicles must have at least 2 major modifications done in the traditional style.
A traditional hot rod or custom does not appear to be stock. For entry consideration for the Pileup, vehicles must have at least 2 visible and intentional changes. Changes can include (but are not limited to) lowering, pinstriping, wheel/hubcap changes, paint (e.g., flames, metalflake), etc. Simply bolting something on like different mirrors, drag plates, stickers, etc. does not count. Rust or sagging springs do not count. Rust has nothing to do with traditional hot rods or customs.

2. All vehicles must appear as a traditional hot rod and custom.
This means all cars in the show should look like they could have been built in the 1940s, 1950s, or 1960s with little or no visible modern equipment.

This also means:
a. No art cars, including “shock rods” (*see below)
b. No billet aluminum anything, including wheels, interior and engine parts
c. No modern rims
d. No digital gauges
e. No neon, 80’s style monochromatic paint or mural graphics
f. No IFS on fenderless cars
g. No TPI/EFI (with open hoods)

3. All vehicles must have tires and rims that are reminiscent of the 1960s or earlier.
This is one of the biggest problems we run into every year. Cars with modern rims, low profile tires, etc will not be allowed into the show, no matter how historically correct the rest of the car is.

a. Mag wheels at our discretion
b. No Low-profile tires
c. No modern lowrider wires
d. All vehicles limited to 4 wheels maximum (no duallys/dual axle trucks, etc)

4. Trailers are NOT allowed!
Vehicles seen at Progress City on a trailer will not be allowed into the show, not even in the parking lot. The only exception to this rule is race cars and projects cars that are not street legal (e.g., dragsters)and who have received pre-approval from the Chrome Czars.

I had no idea what to expect with such strict rules, but I was not about to complain. I’ve been to many car shows where nearly new and not even a year old cars have won trophies and the owners had only added some neon lights or not anything other than keep their car clean. We weren’t going to see any of this at the Hunnert Car Pile-up.

TheDailyDrivers.com crew was actually quite overwhelmed when we first got to the show. There were a lot of cars and at least 90% of them were more 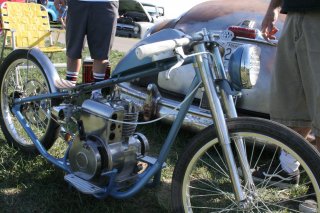 than awesome. As we went down the first row, we found our A.D.D. started to kick in and we couldn’t stay on task of staying in one row. We were all over the place due to so many amazing cars, bikes, motorcycles, and mini-bikes, yes, mini-bikes. We found ourselves about 4 rows away from where we started when we decided to regroup and hit the swap meet. The swap meet wasn’t very big so it wasn’t long before we were back to the cars. It is too bad this is the last year for the Hunnert Car Pile-up, because it was simply amazing. Everyone we interacted with had a great attitude and they were more than willing to talk about their cars. The day brought great weather and an even greater time. Hopefully there will be a club or group which will continue the Pile-up event although they won’t be able to use the Hunnert name. Check out some of the cars we go to see in the pictures below.

Tags:
Previous Article
Was that a Hyundai or a Mercedes with a Bentley badge?
Next Article
The Lego Volkswagen T1 Camper Van