Chevy starts the truck battles again! Chevy vs. Ford vs. other 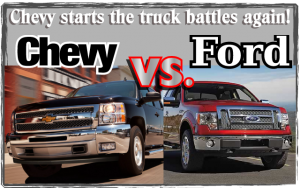 In case you missed it, Chevy took a swing at Ford in their recent Super Bowl commercial (available to be viewed below). Basically, Chevy insinuates if you own a Chevy truck, it can get you through anything, including the apocalypse, but if you have a Ford truck, you are doomed.

This jab has fired Ford up! So much so that they even tried to stop the airing of the commercial on Super Bowl night, but they failed. The Ford trucks vs. Chevy trucks battle has been rejuvenated and it is bringing a lot of publicity. I personally am glad to have this battle back. Yes, there are other players, but the sales totals don’t even come close to what Ford and Chevy trucks bring to the table.

In 2011, the Ford F-Series sold an estimated 584,917 trucks and GM sold an estimated 564,300, while the next closest competitor would be the RAM trucks with only 244,763 sold. This is obviously a battle only between Ford and Chevy. I personally wonder if Ford will take a jab back at Chevy or if they will take the higher road and simply keep doing business as usual. All I know is that the battle has been renewed and the 2012 truck battle is going to be interesting. Let us know your favorite truck in the poll below.

Which truck do you choose?

Was that a Hyundai or a Mercedes with a Bentley badge?
Rob September 30, 2011
Created by TheDailyDrivers.com ©All rights reservd.
Loading Comments...