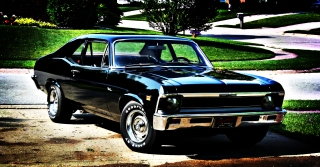 Tags:
Previous Article
The Return of Studebaker?
Next Article
Indianapolis Cars and Coffee